King Equilibrius passed away, and the dark ages began. The world of Sigillum had never seen such chaos before. Driven by greed and desire for absolute power, the contestants for the throne unleashed a war in the Kingdom of Two Castles. Many cycles passed, and no one emerged victorious. But once the leaders had heard a legend about a mysterious magic book that could be used to summon the mighty otherworldly warriors, they became obsessed with the idea of finding it. That book was called the Bestiary of Sigillum.

Bestiary of Sigillum: Collector's Edition is an updated & extended version of Bestiary of Sigillum. Design and illustrations were reworked, and now the game looks even greater, allowing players to immerse themselves into an atmosphere of a fierce fantasy battles.

The game has neither random events, nor hidden information, which makes it a great battle of wits, which couples greatly with impressive replayability, strategic depth and room for all kinds of tactical decisions.

In Bestiary of Sigillum you take on the role of summoners in the Kingdom of Two Castles. To play the game, you choose and summon your force of otherworldly heroes. Each character has a distinct combat role with a unique set of abilities which, when combined well, will compliment and reinforce other heroes.

The main goal of the game is to destroy the opponent's castle. In order to do so, you should control siege towers placed on the game board, and destroy enemy characters. You should carefully think through every move, keeping an eye on the opponent’s actions and pick characters, paying attention to their strengths and weaknesses. 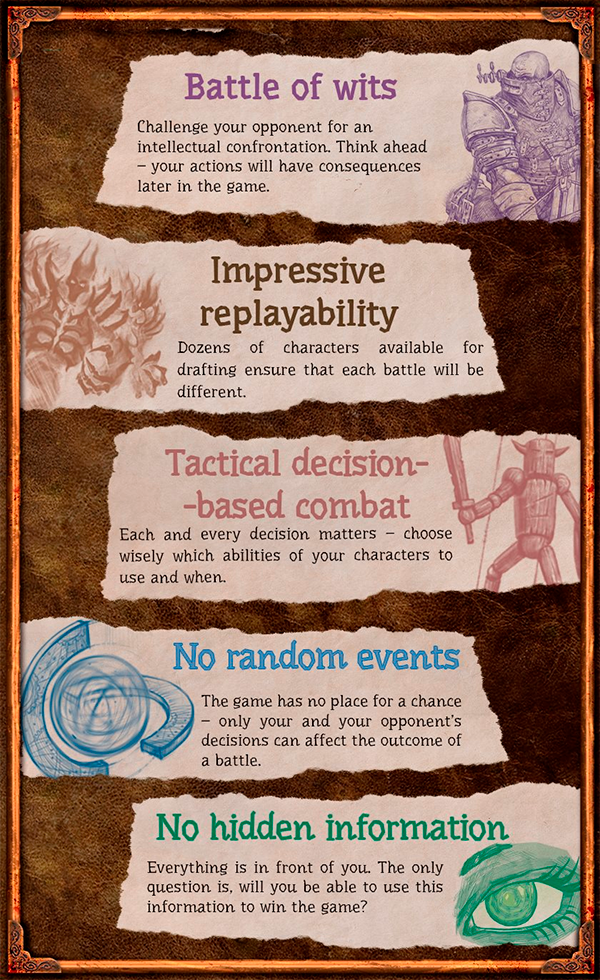 This edition is a prototype. Work on the all components and the organizer is in progress!

Bestiary of Sigillum was created by Peter Vibe, an independent board game designer who started his own game development studio back in 2013.

Like many, he started his board game path with Monopoly and Chess, but then encountered Carcasson and Rummikub. These games changed his perspective on modern board games, and some time later he decided to create his own game. In the studio, Peter combines various roles from the game designer to marketer and accountant.

Peter spent months working on the core mechanics of Bestiary of Sigillum, considering many different options - for example, in early drafts, the game had 3x3 square board. The whole world of Sigillum, with its characters, factions and history, was created by Peter. At some point, he even had to buy a graphics tablet to draw sketches that could show his vision to the actual artist and graphics designer.

After the first prototype was ready, the rules stayed pretty much the same - it’s the characters abilities that were constantly tweaked and fine-tuned to achieve balance, replayability… and intellectual fun. Peter Vibe has a unique philosophy that he implements in his board games, which boils down to six core principles:

Please note that the game you see in the videos is a prototype copy created for gameplay demonstration.

Preview by Shut Up & Sit Down:

Quick Overview by Off The Shelf Board Game Reviews:

Review by Off The Shelf Board Game Reviews:

Preview by The Discriminating Gamer:

Full Playtrough by Off The Shelf Board Game Reviews:

Playthrough & Preview by Board Of It: