Global Conspiracy extends your experience of Deep State and consists of 4 Modules you may add into the game in any combination you like. 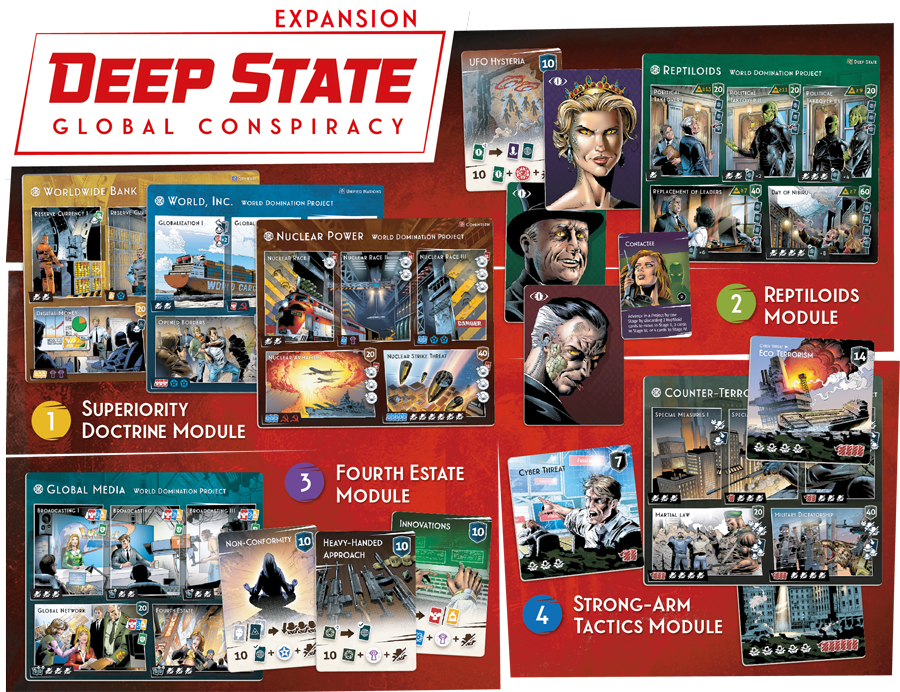 Some Modules contain Projects and mini-expansions which can be added to the game separately.

All Modules and mini-expansions, with a few restrictions, work great with each other. Yet some work better than others. Recommendations are provided in the rules. 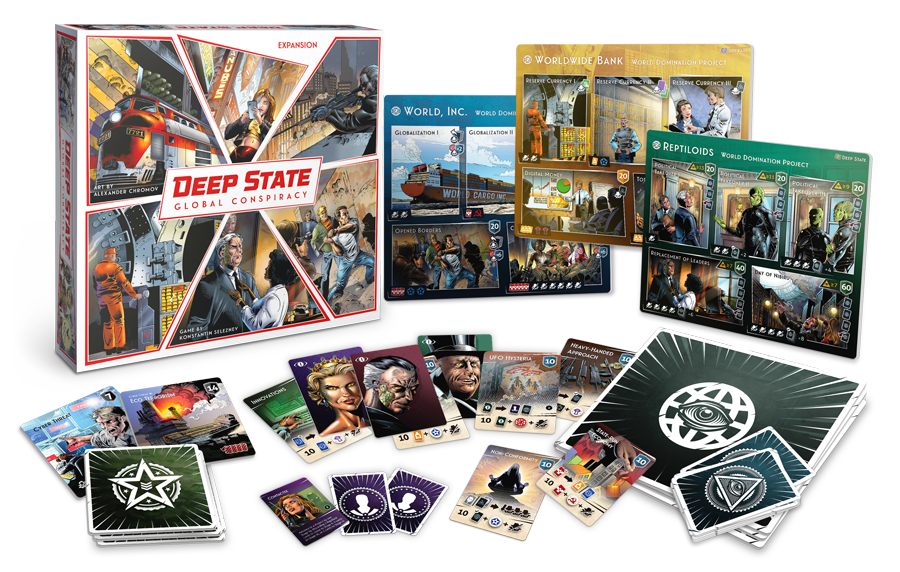 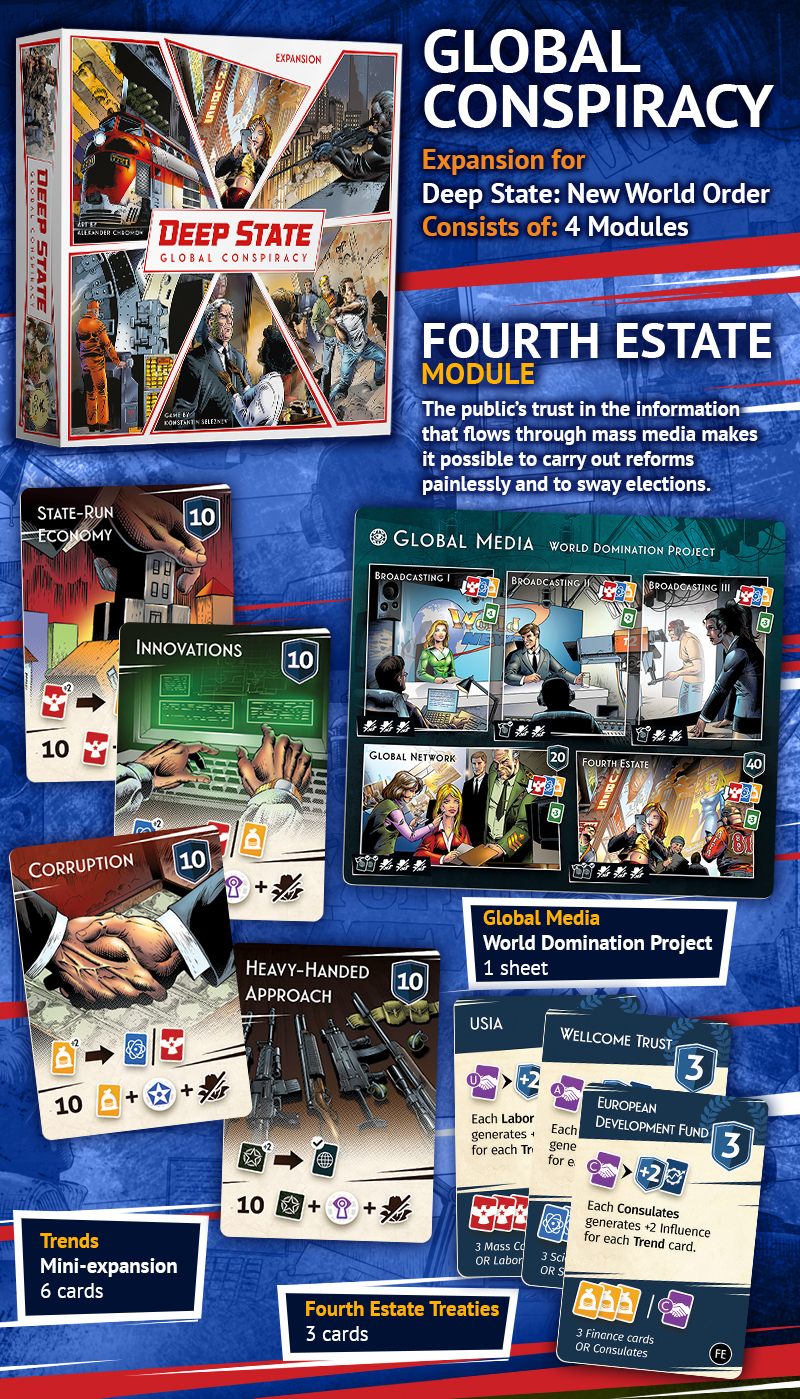 The Global Media Project requires you to sacrifice Treaties you have already made. But with this high cost, comes big benefits.

Each time you advance in Global Media, you immediately take any Objective card belonging to the Mass Control, Science, or Finance group from the Infiltration Zone. If there were Agents on the card, they are returned to the respective player.

Additionally, at the end of the game before the final calculation of Influence, choose one of your Supreme Power cards. Depending on your current Stage in Global Media, this card will generate 1, 2, or 3 Influence more!

Social-political currents — or simply speaking, Trends — usually originate in a highly influential country, and then like wind spread around the world. Such currents are strong enough to break the conventional patterns of actions. They have the ability to both help and harm your plans.

Each Trend provides useful advantages for the duration of a game round. This is called ‘Trend Impact’.  It is depicted with icons on the Trend card. Each time a player meets the condition shown on the Trend card, they may, if they want, immediately receive the benefit — Secondary Objectives, new Treaty cards, Recruit Agents, and more.

An active Trend may be captured — it’s a new Action. To capture a Trend, a player must lose 10 Agents. But a player sends 1 Agent less for each card and emblem they have as specified in the Trend requirements! Capturing a Trend is impossible at the beginning of the game, but creates a ‘golden rush’ in the end. 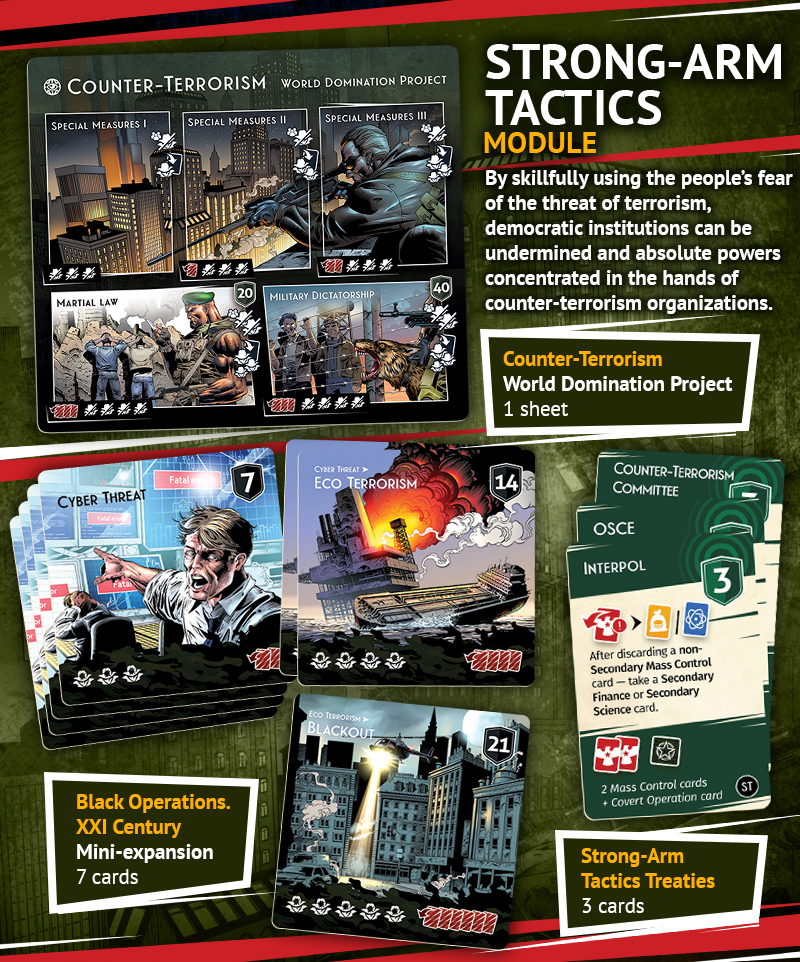 You discard cards to advance in the Counter-Terrorism Project. This can be any cards from your playing area, excluding Treaties.

As a benefit, you may use Agents from your Recruitment Pool when Infiltrating an Objective or Carrying out a Covert Operation. Additionally, you eliminate your opponent's Agents while Advancing in the Project.

The XXI Century offensive opened a new chapter in the history of Covert Operations. Black Operations can be carried out by both terrorist organizations and special forces. It might seem Black Operations have no other purpose than chaos and destruction. In fact, they change the rules. The winner will earn the ruins of the world, but it will be their ruins.

Black Operations are another type of Covert Operations. They require less Agents, but you have to discard your cards to conduct them. You Carry out Black Operations in order — Cyber Threat first, then Eco Terrorism, and finally Blackout. 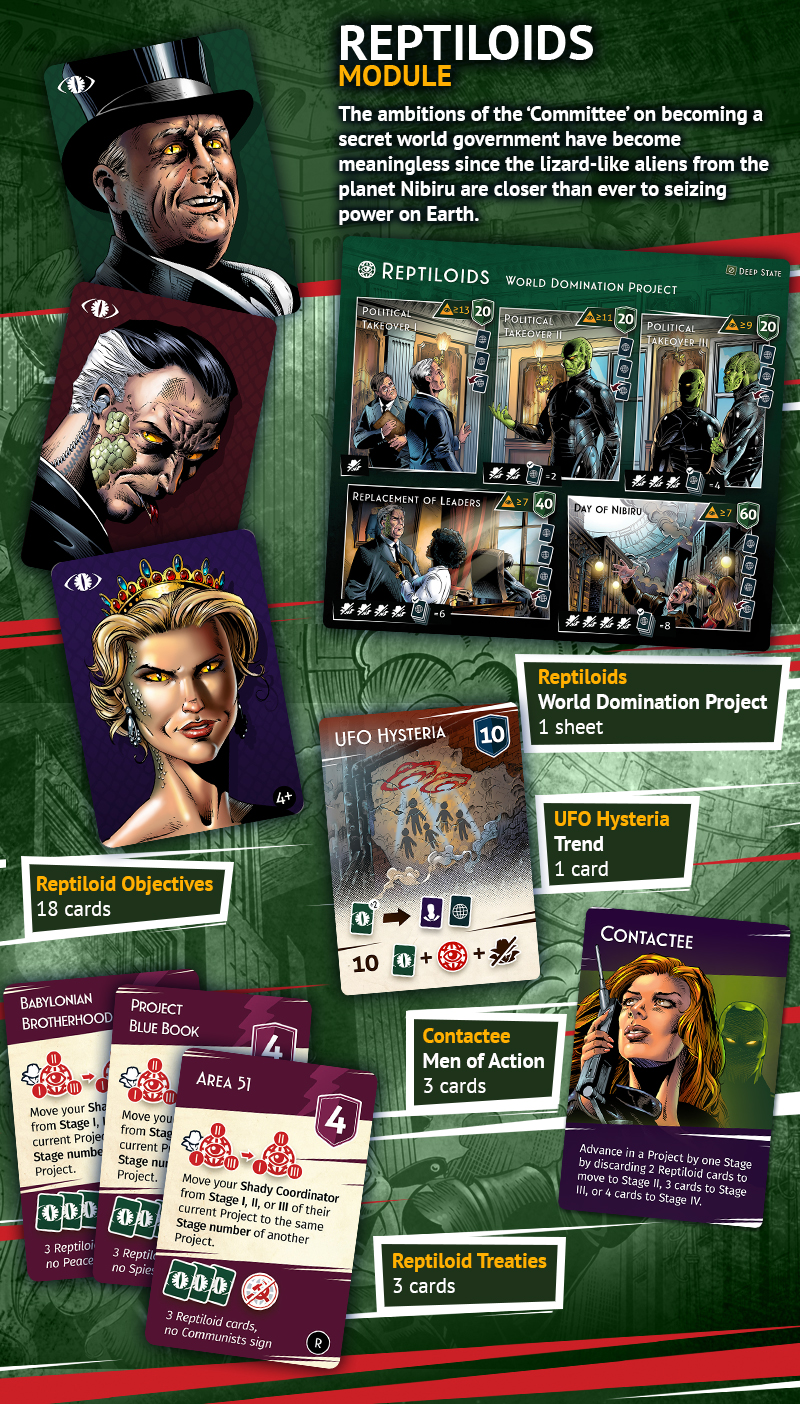 With the Reptiloids Module, Deep State takes a step into a fictional aspect of conspiracy theories.

Reptiloids Project effectively replaces the Deep State Project. Joining this Project allows you to earn the favor of Reptiloids and take a worthy place in the new world!

Players compete for Reptiloid Objective cards that allow them to make new Treaties while ignoring their conditions, and they advance in Reptiloids Project in order to obtain new Treaties and gather Influence at the end — but only if they have enough Special Interest emblems on their cards! 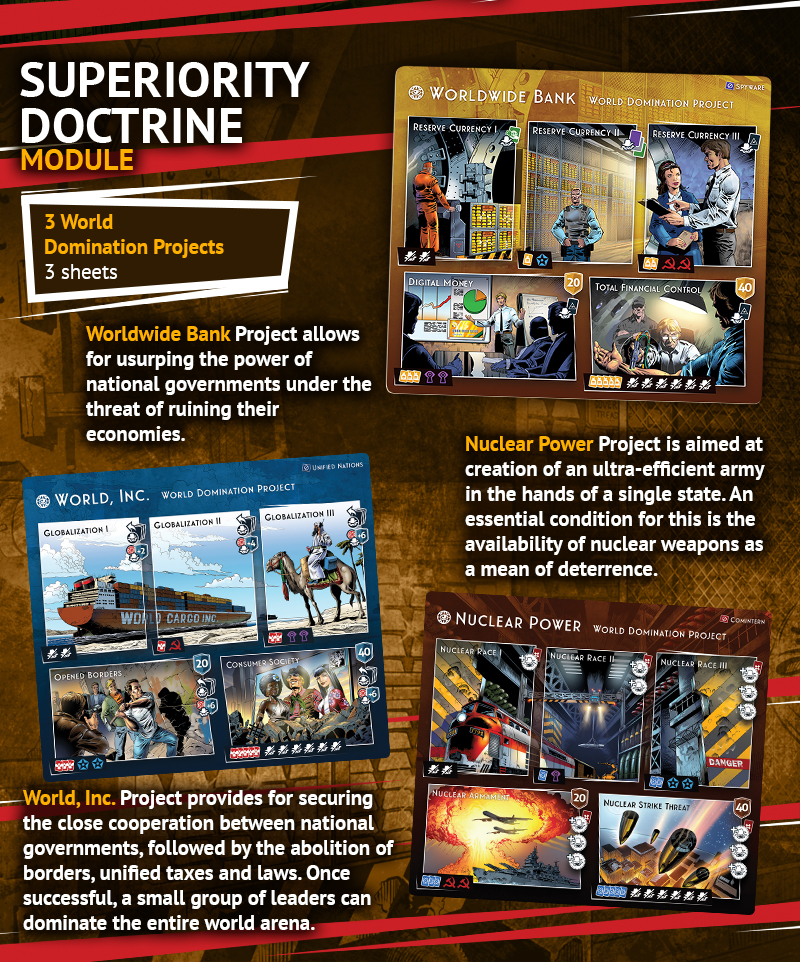 Each of these three Projects replaces one of the base game Projects. 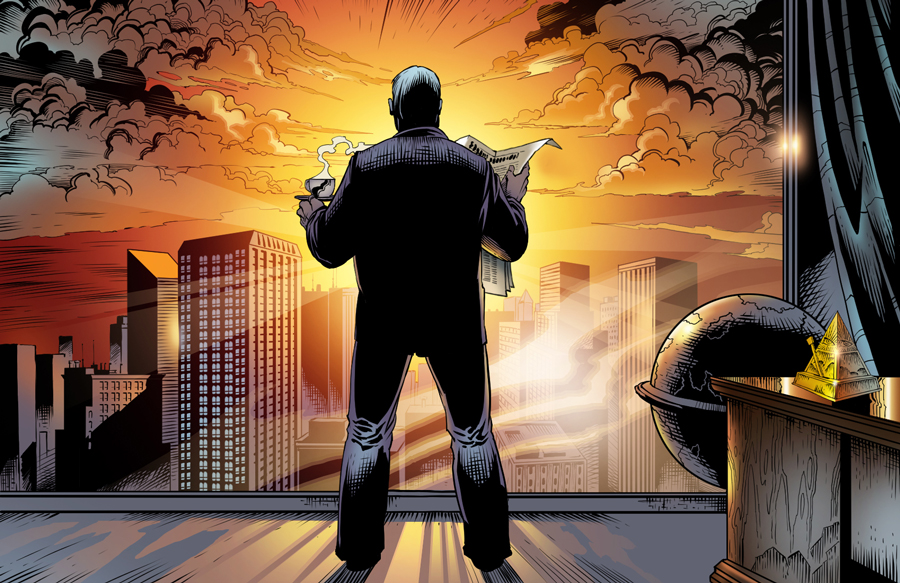 Is That Right Gaming - Unboxing: