This Mini-expansions set extends your experience of Winter Queen and consists of 3 expansions you may add into the game.

Winter Queen — an abstract strategy game from Yuri Zhuravlev (Space Explorers, Viceroy). As a wizard in the Winter Queen’s annual competition, you cast spells and vie to claim the title of the Queen’s Key Advisor.

During your turn, you draft crystals and place them on the game map board known as the Queendom, thereby creating beautiful colorful patterns and gathering Spell Books. Alternatively, you may place crystals on your Spell Books to ignite their magical powers.

When you are ready, you may activate your Spell Books to produce spells and gather victory points in the form of golden coins. The wizard who has the most gold by the end of the game wins the contest and becomes the Queen’s new Key Advisor.

Winter Queen is fast to play. Its rules can be explained in 5 minutes. It shines as a family game because it is easily accessible for all players and has stunning components.

Here are some key features of the game:

The residents of the Queendom appreciate all the work you do to protect the land from disasters, and would like to show their gratitude. With this expansion, every crystal you place on the map gives you new and very useful opportunities.

The "Gratitudes" mini-expansion allows you to build up a more flexible strategy, because every crystal placed on the map not only gives you a spell book, but also flips face up, or activates a special Gratitude token of the same color (if it is not already active). An active Gratitude token can be used either before or after your main action (and sometimes even during your opponent’s turn!) to gain a useful effect. For example, you may swap any 2 Queen’s Domain tiles on the map or forbid your opponent to remove their chosen crystal from the map. After a Gratitude token’s effect has been applied, the token is flipped face down to show that it may not be used until you activate it again. 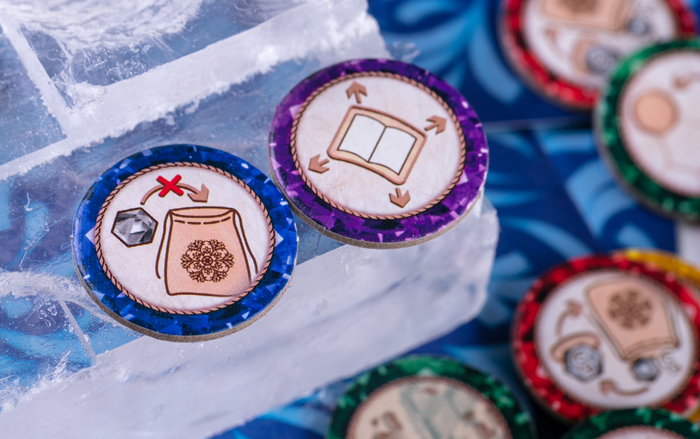 This mini-expansion will appeal to everyone who prefers placing many crystals of different colors, as it allows you to get a really tangible advantage over your opponents.

With all the spells being cast, there are bound to be plenty of broken crystals. These colorful shards are not as strong as crystals are, but they’re anything but useless. With their remaining magical power, you’ll add them to the Queen’s jewelry and create beautiful artifacts. By no means it is an easy task, but Winter Queen will generously reward everyone who can succeed in this. 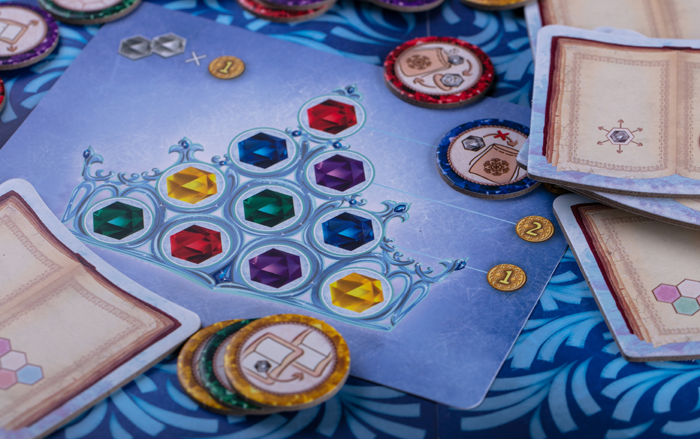 The “Royal Jewelry” mini-expansion offers you another way to get victory points: for the crystals that you discard from the spell books after they are activated. After applying effects of one of your Spell Books, you move the crystal(s) to your Jewelry card and keep there until the end of the game. You can use crystals to create a tiara or just place it in your Treasury. The tiara is much more valuable for the Queen, and it is for the tiara she is ready to generously endow you.

Anyone who loves to strategize around their personal goals will enjoy this mini-expansion, as a tiara fully filled with crystal will earn you ten victory points, and that’s a lot. Achieving this requires a lot of effort, but the reward is worth it!

The Queen’s wizards don’t always compete with each other. Sometimes, they hone their skills alone with special tasks that come directly from the Winter Queen. Grab your new spell books and do your best to impress the Queen! 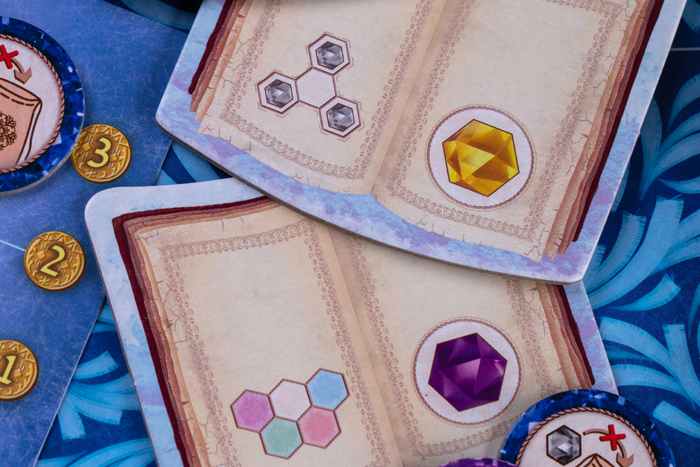 The “Great Wizard” Solo Mini-expansion is a single player mode in which you need to score as many victory points as possible using only 20 crystals (4 of each color) and 8 special spell books. The gameplay is mostly unchanged, but make no mistake, you have to be a really skilled wizard to even try to beat the game and earn the title of the Great Wizard.

This expansion will appeal to those who enjoy leisurely puzzles over a mug of tea, and to those who love to come up with new strategies and try new tactics. The “Great Wizard” Solo Mini-expansion is fully compatible with both “Royal Jewelry” and "Gratitudes" mini-expansions, which not only enrich your gaming experience, but also allow you to attain the rank of Archmage or even Queendom Protector.

LIVE Playthrough by The Nerd Shelves: