The magical contest is about to begin! Once a year the Winter Queen enchants the snow in her Queendom, turning it into shining crystals ablaze with the colors of the northern lights. Wizards use the enchanted crystals to weave magical spells that will protect the Queendom from woe and misfortune and earn the recognition of its citizens.

The Winter Queen awards the wizards with golden coins for each cast spell. In truth, the gold itself is of little importance to wizards. What is truly important is that the best wizard will be proclaimed the new Queen’s Key Advisor for the next year. 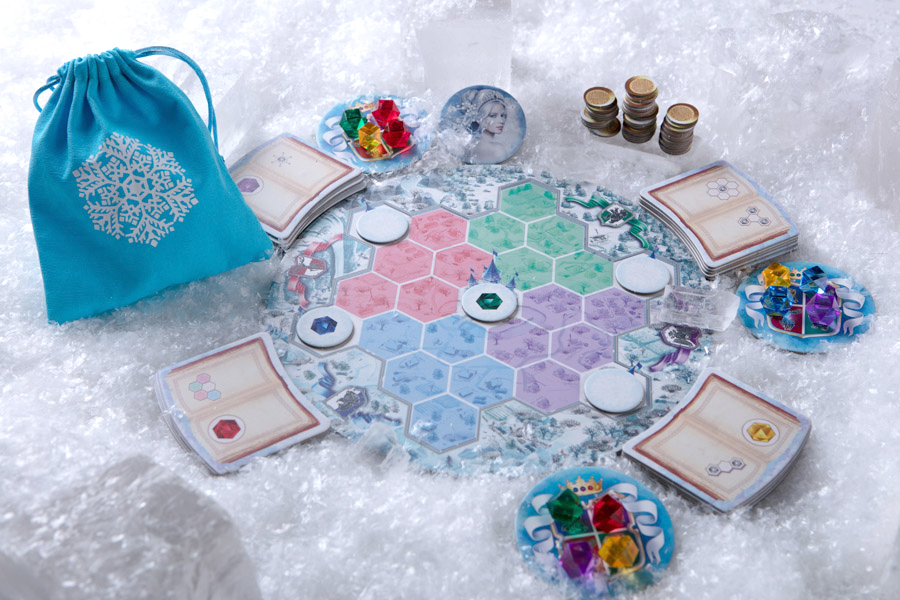 You are one of the wizards participating in the magical contest. Grab your magic book, study up, and get ready to impress the Winter Queen with your greatest spells.

Winter Queen — an abstract strategy game from Yuri Zhuravlev (Space Explorers, Viceroy). As a wizard in the Winter Queen’s annual competition, you cast spells and vie to claim the title of the Queen’s Key Advisor.

During your turn, you draft crystals and place them on the game map board known as the Queendom, thereby creating beautiful colorful patterns and gathering Spell Books. Alternatively, you may place crystals on your Spell Books to ignite their magical powers. 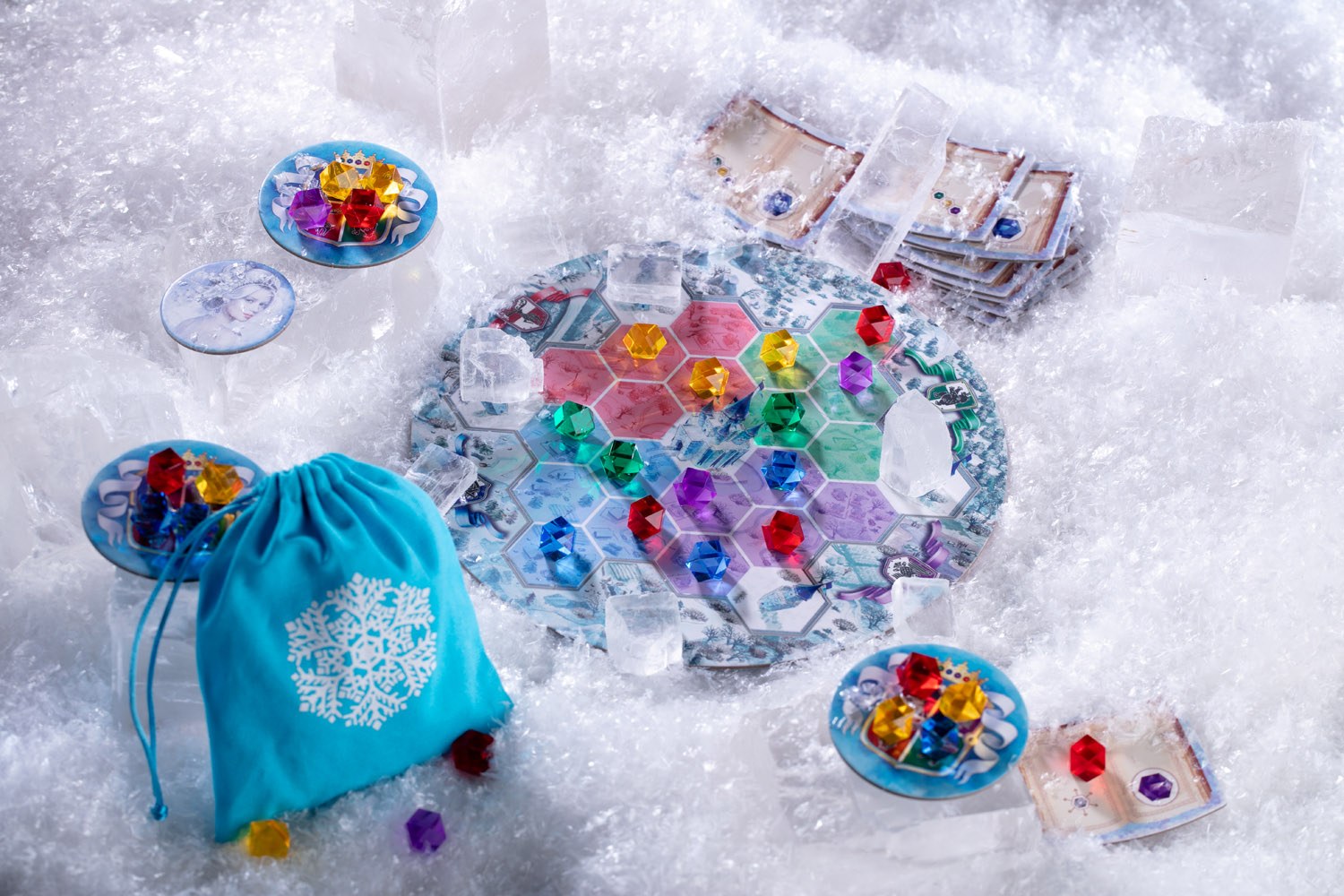 When you are ready, you may activate your Spell Books to produce spells and gather victory points in the form of golden coins. The wizard who has the most gold by the end of the game wins the contest and becomes the Queen’s new Key Advisor.

Winter Queen is fast to play. Its rules can be explained in 5 minutes. It shines as a family game because it is easily accessible for all players and has stunning components. 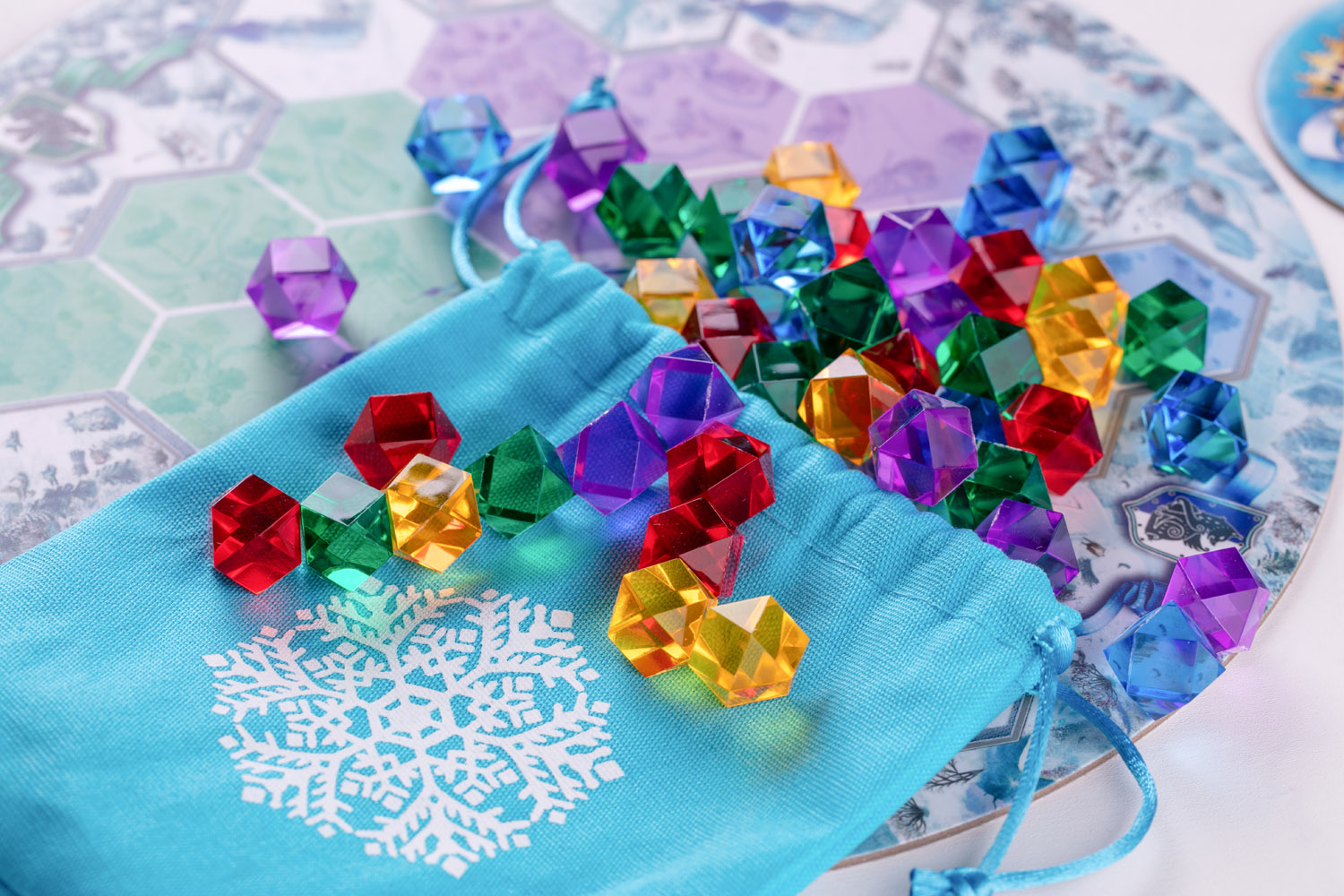 At the same time, Winter Queen provides enough depth to create an ultimate challenge for experienced players. The game has a high degree of player interaction and allows for a lot of strategical decision.

Winter Queen is an abstract family game. You will take on the roles of Winter Queen’s sorcerers, creating magical ornaments out of enchanted crystals. Each turn you either place a new crystal onto the board or use already placed crystals to score victory points depending on the spell books you and your opponents have.

Here are some key features of the game: 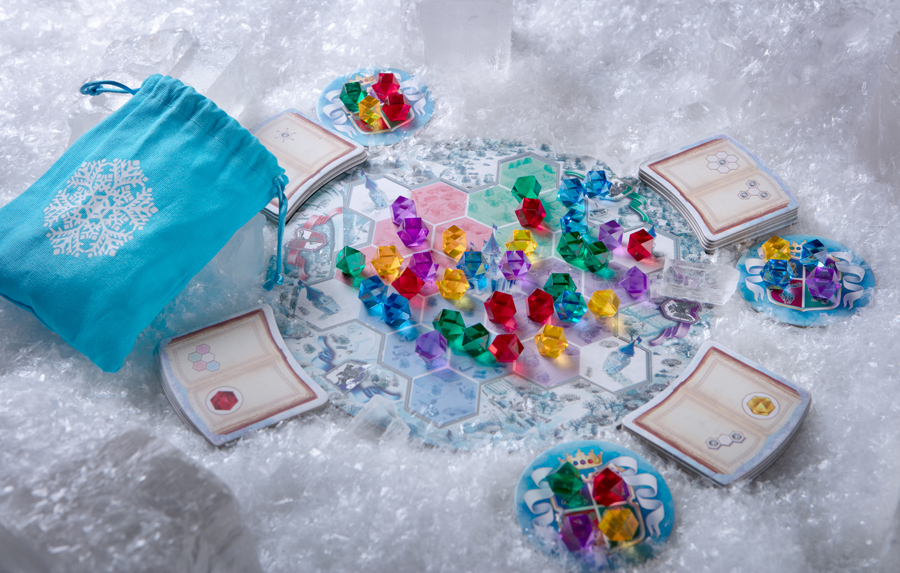 Winter Queen has eye-catching crystals designed and manufactured specially for CrowD Games. They are bright and colorful, and shimmer in the light. While you surely would love to use these beauties as decorations, they will serve you much better as great gaming piece. 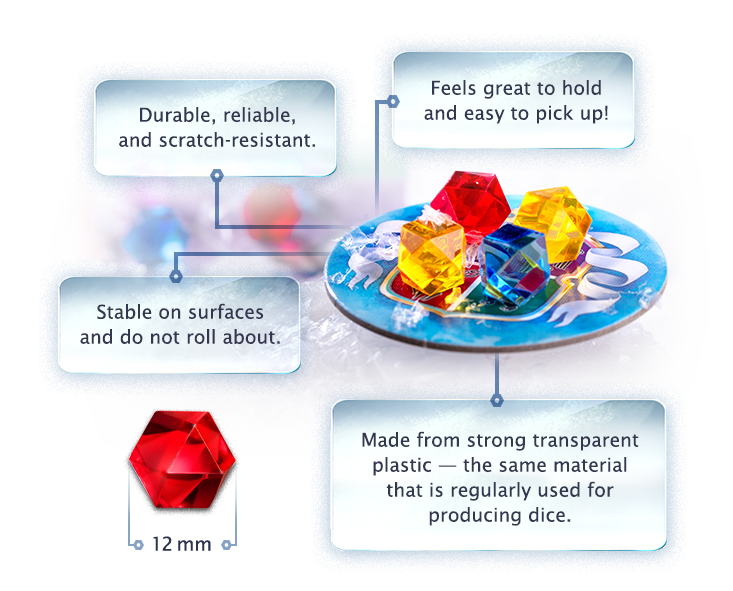 You might have seen similar crystals in Ganesha — another great abstract strategy game developed by CrowD Games. Winter Queen and Ganesha form our abstract product line that most likely will be continued in the future. 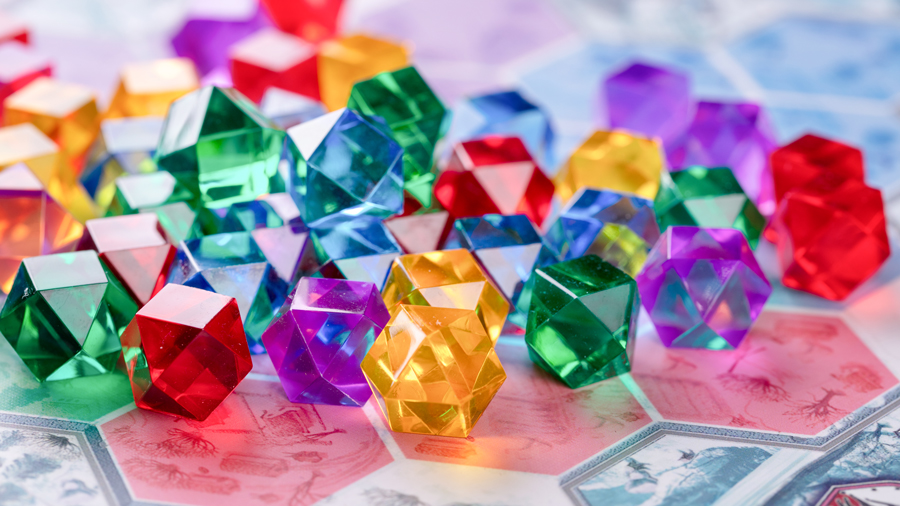 Setting up a game takes only a couple of minutes. Around the Queendom map, place 4 stacks of Spell Books and the Crystal Holder tiles. Fill the bag with Enchanted crystals, then place 4 random crystals from the bag on each Crystal Holder tile. Place 5 random Queen Domain tiles on the map and pile the Victory Points tokens nearby. Give the first player token to the person who saw snow the most recently. Time to begin! 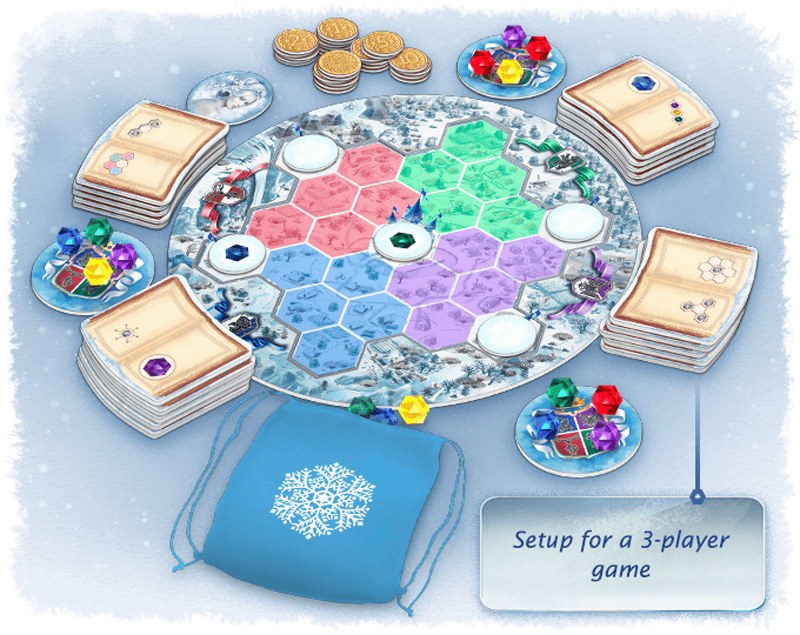 Action 1. Place a Crystal on the Map

Take a crystal from a Crystal Holder tile that is either to the left or right of you (or from any of the three in a 2-player game). Place it on an empty space on the map. The map is divided into 4 counties. After placing a crystal in one of the countries, you may take the top Spell Book from the stack next to that county.

By placing a crystal on a free Queen’s Domain tile, you may take the top Spell Book of any stack

Action 2. Place a Crystal on a Spell Book

Instead of placing a crystal from the Crystal Holder tile on the map, you may place it on an empty page of any of your Spell Books. Each Spell Book has 2 pages.

When you take the last crystal from a Crystal Holder tile while taking Action 1 or 2, take 1 Victory point token and put 4 new crystals from the Crystals bag on the tile.

The last of the three possible actions — activate one of your Spell Books, on which you already have 1 or 2 crystals, and get Victory points. The number of VP depends on which crystal you earlier placed on the Spell Book and how the crystals are laid out on the map.

Winter Queen has 20 Spell Books. You will find 8 different Spells on their pages. Each book offers a unique combination of two of these Spells.

After activating a Spell Book with 2 crystals and receiving your VP, take any 1 crystal from the map and return it back to the Crystals bag. This allows you to effectively change the pattern of crystals on the map, preparing it for your next Spells and interrupting the plans of the other wizards at the same time!

Remember, what benefits you or ruins the plans of one of your opponents — may be advantageous for someone else!

When the last crystal from the Crystals bag is taken, the final part of the game begins. Move all crystals remaining on the Crystal Holder tiles to a single one of them. It is now available to all players. After finishing the current round, each player has one more turn and the game ends. 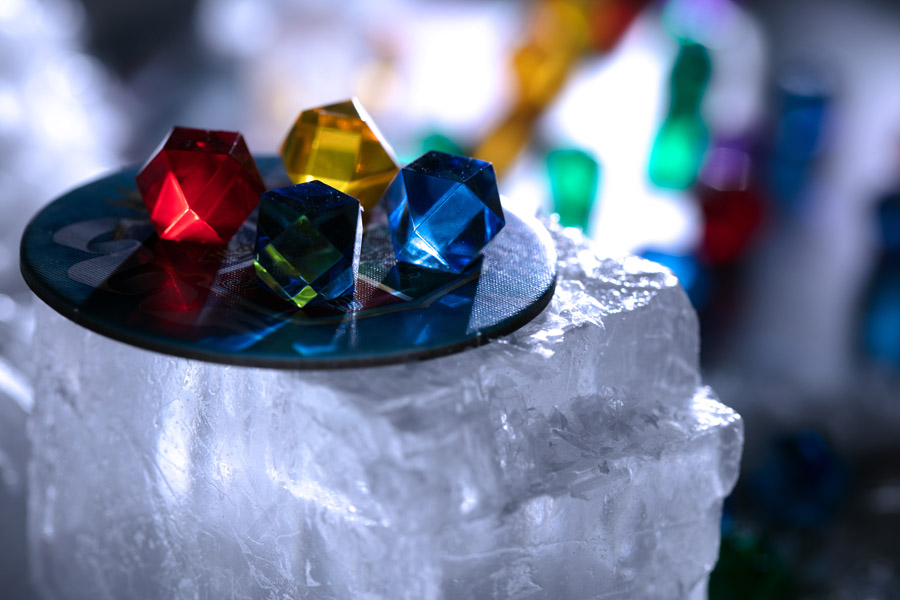 Players activate their remaining Spell Books, but do not remove any crystals from the map this time. The player with the highest number of Victory Points wins the game and becomes the Queen’s new Key Advisor!

Steph and Michael (from boardgamersteph & All the Meeples of the Rainbow) teach and playthrough:

Unboxing by Board Game Gumbo:

LIVE Playthrough by The Nerd Shelves:

Unboxing by Dice and Dragons:

Unboxing by Board Game Empire:

Review by Board Game Empire:

Playthrough by Board Game Empire:

Review by Dice and Dragons:

Tutorial in Italian by alessandra1982giochidatavolo:

How to Play by Nastolki LIVE: 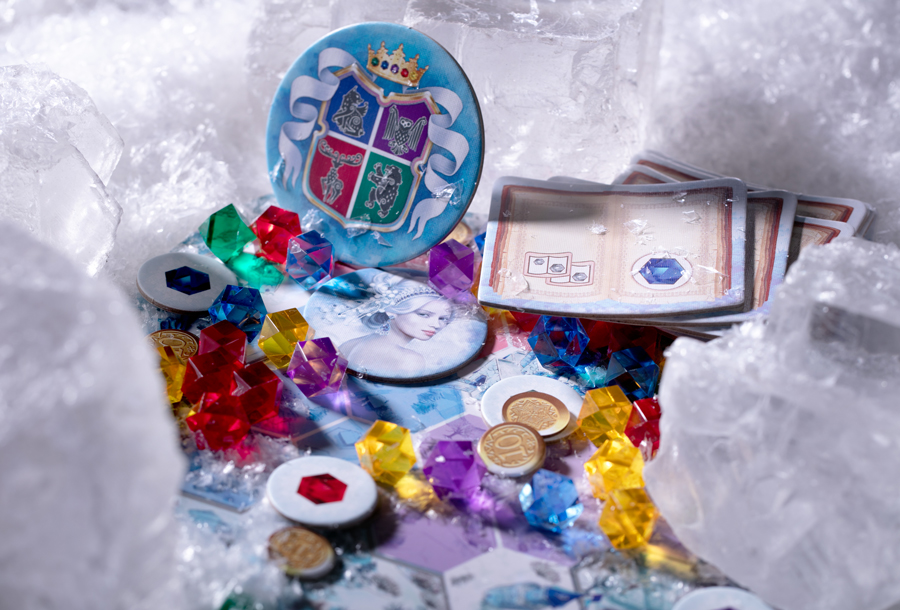